skip to main | skip to sidebar

It's been a turbulent period for the Manband with the band disintegrating during the recording of a new album. The end result was that Martin Ace, Phil Ryan and Josh Ace have regrouped bringing in James Beck on guitar and Rene Robrahn on drums. The ejected George Jones and Bob Richards are looking to regroup themselves with some new musicians as well, but it's the new version of the Manband that have proven to be first out of the traps to hit the road.

Following the sessions which precipitated the split, the album was resurrected and with the addition of a couple of new tracks and the replacement and/or removal of George's guitar parts was issued earlier this year as Kingdom Of Noise (Bob remained on all bar the two newer tracks). The album shows every sign of its' difficult gestation and struggles to really cohere as a collection of songs. Perhaps most disappointingly was the seeming absence of Phil Ryan on the composing front, and the more background role he seemed to be playing on the keyboards.

The band toured Germany earlier on this year and bravely (or foolishly depending on your view) built their set very firmly around the new album and put some of the classic Man songs to one side, but also perhaps some of the style that I've come to admire went with it too. The recordings I heard certainly indicated a more than competent band but what was missing was that magic spark that has singled out the Manband in all its' varieties over the decades.

A brief British tour was announced for late September/early October and part of the schedule was a gig at The Inn At Lathones. This is actually about seven miles outside of St Andrews in Fife. Certainly, my initial intentions had been to give this a miss as it represented about a four hour round trip there and back from Paisley, and the combination of the albums and the earlier recordings rather made me feel that this wasn't worth the effort. A far cry from the times when I'd happily drive to Swansea for the once regular Christmas Parties!!

However, the indications from the earlier gigs (Lathones was the last date in the tour) were that the band had reinstated some of the older classics but, more importantly, were approaching the material with a fresh eye and consequently were playing with some vigour and purpose. From reports from a number of gigs came similar reports so I was forced to reconsider my position.

I am happy to report that I am extremely glad that I did. The performance was excellent and the familiar numbers had been sharpened up with some fresh arrangements - many of the changes were minor but had the impact of catching the ear turning, as an example, opener The Price into a much more substantial number than it had ever previously seemed to be. Similarly, the rhythms on Mad On Her were subtly amended which made it just a little less of a straight forward rock song.

Of course, the biggest questions would be answered by how the classics were tackled - the setlist included C'Mon, Spunk Rock (unusually in midset), Many Are Called But Few Get Up and, as part of the encore, Bananas. All were more than recognisable but there was no attempt to mimic what had gone before, and in doing so made the songs sound remarkably fresh instead of the almost 40 year old warhorses that they are.

Of the recent album, only three tracks remain and they held up remarkably well. They showed some fine tuning from the recorded versions - they probably reflected three of the four best songs on the album - which suggests that the band might have been better served by working this material out on the road before recording them.

New guitarist James Beck was impressive and seems to have stamped his authority on the songs, without ever stooping to attempting to copy or match what we've been used to by the Jones family. I've no doubt he feels a little overawed by the legacy he has taken in but he certainly gave the impression of wearing this lightly.

Josh Ace gave the most assured performance I've seen from him and his singing was the strongest I've heard from him. He's much more of a no-nonsense player than others in the band, and doesn't appear to have inherited any of his father's more extrovert genes.

New drummer Rene Robrahn adds a very different feel to his immediate predecessors. He can be as direct as we'd become used to by Messrs Richard and Weathers but also seems to be able to play at the lighter end of the scale when needed and, as such, is perhaps the closest the band have had to the style of the peerless Terry Williams.

Old hands Ace and Ryan weren't allowing the younger members to have it all their own way and gave every impression of thoroughly enjoying themselves. The older numbers in particular were used as jumping off points for some jamming and Phil made full use of his solos to impress.

Also worth mentioning are the vocals. There are now four voices in the band and many of the songs were enhanced by making full use of these. Phil also sang a delightful Dream Away which was impeccably delivered.

The venue itself was based in a pretty high end hotel and was formerly the stables in bygone days. It only held about 36 people and allowed for a wonderfully intimate experience. As a consequence none of the instruments were miked up via the PA but the sound was more than fine for all that. Lathones does seem to be a few miles beyond the middle of nowhere, but the surroundings make it more likely that I'll be seeking out some other suitable gigs there.

Following the recent splits, it's been far from certain what the future held for Man. Musically, last night showed that there is life left in the old dog yet and I'll certainly be looking forward to seeing this lineup again in the future.

No pictures from last night, I'm afraid, but there are plenty from recent gigs on the Manband Archive.
Sweated out over a keyboard by Social Liberal Forum (Scotland) at 23:25

Sounds like a corker, as was Southend Riga almost exactly a week before! C'Mon people...Allan & I can't BOTH be wrong! Support the new Manband - you will be glad you did! 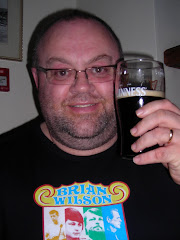